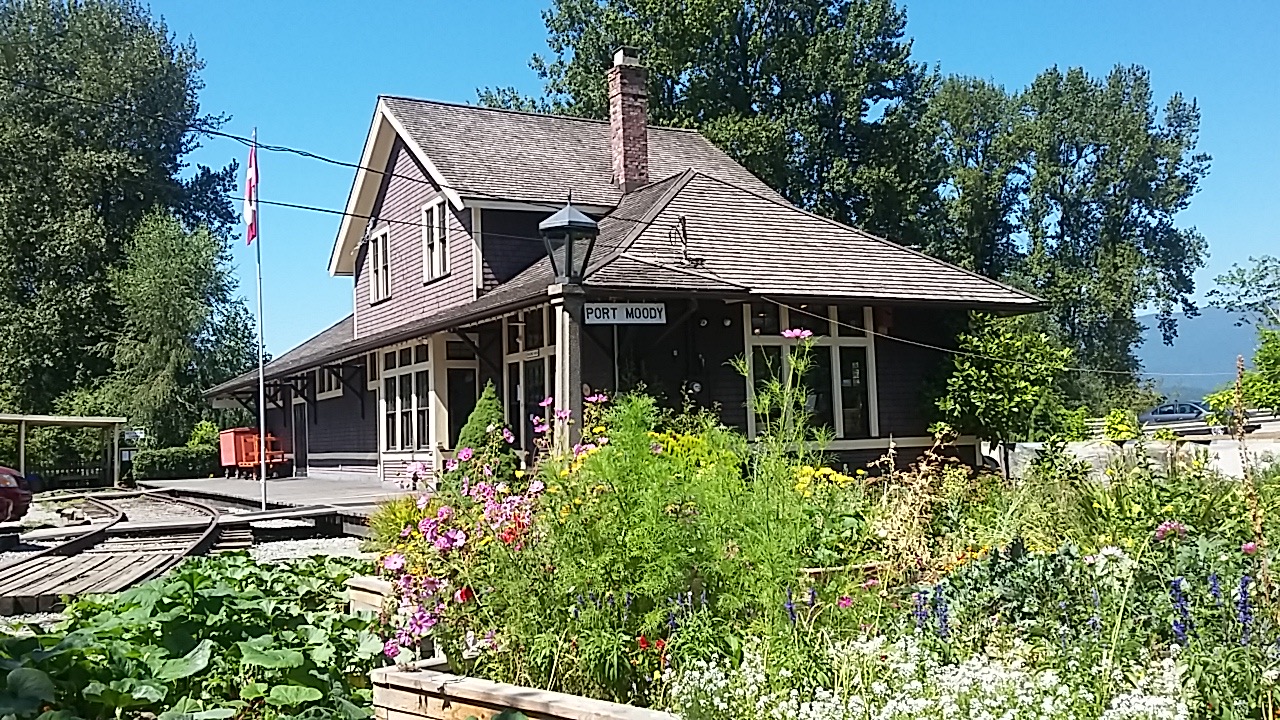 Museum operations are overseen by the PMHS and its volunteer Board of Directors. A full-time Executive Director and two Manager/Curators operate the Museum on a daily basis. Student assistants add support over the summer months and on weekends throughout the year. Volunteers provide support to all operations including maintenance, collection maintenance, garden maintenance, display development, and event delivery.

The Port Moody station, built in 1908, was the second railway station built in the area. The first was the 1882 Western Terminus Station which was demolished in 1961. In 1945, the Canadian Pacific Railway (CPR) decided to move the station closer to town. Their employees cut the station into two pieces, placed it directly onto greased railway tracks and used an engine to pull it to the second location at the foot of Queen St. The station was officially closed on September 25, 1976, when the CPR discontinued their passenger service.The Port Moody Historical Society (now the Port Moody Heritage Society), who were operating a museum on Kyle St, bought the station. In 1978, it was moved to its present location on Murray Street and refurbished to be a museum facility; officially opened on July 1, 1983.

The station, designed to be a live-in unit, consists of two floors and a basement. The main floor is accessible to the public as the main display area; the top floor is being used for administration and the basement is collection storage and washrooms.

The station, designed to be a live-in unit, originally consisted of two floors. The main floor  is used as community and public display space. The Telegraph Office, the hub of railroad activity, features an operational telegraph system, which is available for visitors to try, and a hand-operated telephone from 1884 when the Port Moody and New Westminster Telephone Co. was the first telephone system in B.C.

The Waiting Room contains wooden benches and CPR travel posters together with a ticket booth. The restored Parlour and Kitchen show the living conditions in the station between 1908 and 1930. The Large Exhibition Room features permanent exhibits of Port Moody’s Industry and community in the early 1900’s. There is a lumber display showing materials from early saw and shingle mills, a pot-bellied stove, historic photo collection display, a general store and a model of early Port Moody. The Small Exhibition Room displays include a First Nation’s display of Salish artifacts, the fur trade, the Royal Engineers, the First Train and the Western Terminus of the CPR.

The basement of 240 m2, was added when the building was moved to Murray Street and is the museum’s collection storage area. The upper floor of 60 m2 is used for offices and administration.

Outside displays feature the “Venosta” a 1921 sleeper car that displays historic railway pictures and artifacts. It is set-up as a dining car for events and Heritage Teas. The Venosta is available for rent for private functions.

The Heritage Garden is planted and cared for by volunteers and staff, and features heritage varieties typical to the gardens of the period that dotted the communities along CPR’s line.

Our Meditation Garden was created and is cared for by volunteers and is a wonderful display of beautiful flowers.

The McKnight Trench exhibit is intended to educate the public about an important part of Canadian History and pay tribute to all of the soldiers that fought in WW1.

The Venosta and Outdoor Exhibits

A CPR sleeping car built in 1921 as the Glen Atha, the Venosta as it is now known, was restored in the fall of 1987, with assistance from volunteers. The major part of the Venosta has been set up as a dining car. It also features two sleeping compartments with accessories from the 1920’s and a ladies powder room. Special events have been held in the Venosta including murder mysteries and afternoon teas. It is also a rental facility for parties, weddings and meetings.

The railway display at the front of the museum exhibits 3 four-man handcars, baggage cart and a boom car, which were originally used by track crews for transportation and delivering supplies for maintaining the railway right-of-ways.

A Heritage Garden was developed in 2001 with the assistance of the Canadian Pacific Charitable Foundation. This garden, with vegetables and flowers, was typical of those grown at stations across Canada during the heyday of steam passenger trains.

A beautiful Meditation Garden was created in 2014 by volunteers and is maintained by them as well.

In 2015, The WW1 McKnight Centennial Trench was built and is now maintained by staff and volunteers. This exhibit is intended to promote an important part of Canadian history and pay tribute to our former engineer and resident, Augustus McKnight. The message we hope the trench will clearly convey is peace and remembrance.